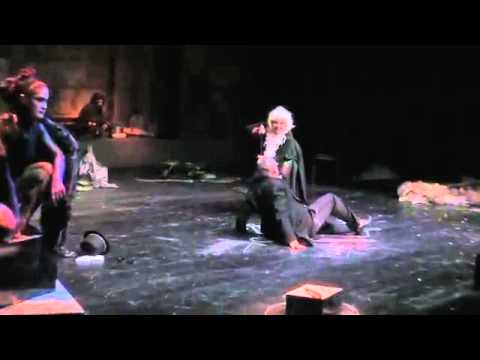 with
BENEDETTA LAURA' medea
CHIARA NANTI angel
MATTIA SEBASTIAN argonauth
ALESSIO MIZZAN hamlet
ARIANNA TYER profuge
percussions GIUSEPPE AMATO
body painting ELENA TAGLIAPIETRA
costumes ALICE VIGANO'
press office ANTONELLA COLOMBO
played in : Italian – English – Deutch – Russian – Greek
Museum after the apocalypse / leftovers:
soldier – woman – field kitchen – cookies – cans – teeth – boot – condoms act casino – tampons – radioactive excrement – angel embalmed – a refugee – freepussy – cabaret leftovers for the next few troops at the front – star rotted – rifle – bitch ex – -Hamlet in metastasis – medea – argonaut – mud – whiskey – presenter – chair – plane – rails – prisoner – lime – the abuse of power – violence – stupidity – abandoned bank – funeral posthumously – silence – party
For this version of Medea, Muller has shuffled and tightly condensed fragments of texts written by Euripide and Seneca with moments of dream, automatic writing and free association between modern landscapes and scenes from the myth. The result of the text, written in a period dated between 1950 and 1980, consists of three parts: Landscape with Argonauts, Riva abandoned and Materials for Medea.
It is central in this reinterpretation of the legend of Jason, the expedition of the Argonauts and the tragedy of Medea, next to the theme of betrayal, that of war (military and commercial) of conquest and colonization.
Mattia Sebastian
info@mattiasebastian.com
This website uses cookies to improve your experience. We'll assume you're ok with this, but you can opt-out if you wish.Accept Read More
Privacy & Cookies Policy